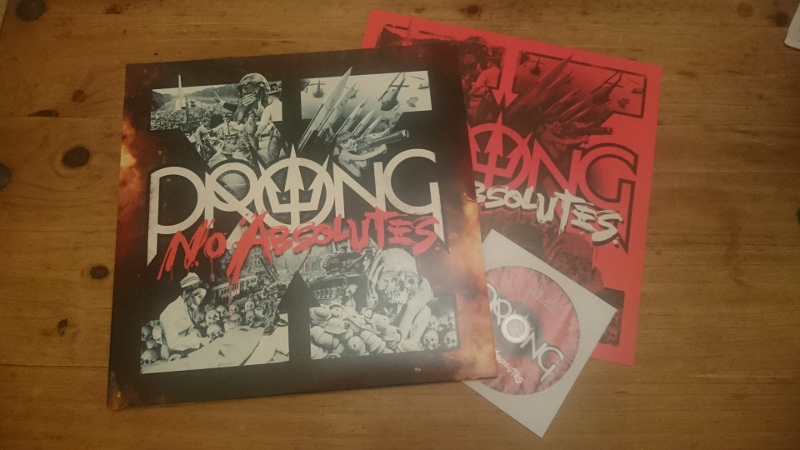 I received my copy of ‘X – No Absolutes’ today and I’ve had several listens to it already.  (Not counting the previous days where I listened to it on Spotify while waiting for it to arrive!)

So I though I’d give a quick round up of my thoughts about the new album, should anyone care 🙂

I’m a fanboi, so I was always going to like it; but this hits the spot harder than most and several tracks stand out immediately.  More than anything I’ve heard from Prong in recent times, this sounds like a coherent band; not a couple of supporting artists recording with Tommy Victor.  I mentioned on my recent write-up about Batman’s Crazy Plan that I think this could be the best post Ted Parsons line-up Prong have ever given us.   Jason and Art really bring something to the band and their influence is surely stamped all over this record?

With the track listing, ‘Ultimate Authority’ and ‘Cut and Dry’ stand out easily due to being more familiar: they were released before the album.

‘Sense of Ease’ really kicks in as the first “new” track.  And kick is the right word.  This is a polished version of very early material.  The lyrics could have come from Beg, the vibe from Force Fed.  It has undertones of classic modern Hardcore Metal, like the now defunct Stampin’ Ground.

‘Without Words’ brings us the fantastic sound and groove that we’re used to in recent albums.  The chorus is the first introduction to a more melodic sound that will soon envelope us.

‘No Absolutes’ starts off like a song that you just know is going to kill you in the pit, but then it takes an unexpected twist into a dance-able number with a catchy chorus.  Quite unexpected!  I get to live another 5 mins in the melee 🙂

But if that was an unexpected twist, ‘Do Nothing’ follows right behind it with a powerful melodic thunder that’s been rattling around my brain for hours after listening to the album.  The change in vocal style influenced by their recent ‘Songs from the Black Hole’ is marked here and the song is all the better for it.  It’s great to hear Tommy stretching himself and trying something tangential..  And it’s not the only one; later in the album, ‘Ice Runs Through My Veins’ uses Tommy’s vocal to fill out the sound more than I’m used to and lays down an infectious groove.  And ‘groove’ is bang on here.  It’s sure to be favourite after the test of time.

‘Soul Sickness’ is one that I’ll have to return to to appreciate more.  I expect this to be a “grower”.   The slower sound lead well into ‘In Spite Of Hindrances’ and ‘Worth Pursuing’: both give us a classic Prong vibe.  The latter of the two could have appeared on any album since ‘Cleansing’.

The album (seemingly) plays out with another vocal laden track, ‘With Dignity’, but just when you think it’s all over, there’s still the bonus track.  The only problem with the bonus track approach is the lack of sleeve notes for it.

Bonus Track ‘Universal Law’ sounds familiar from the get go.  It could have come straight off Carved Into Stone and the opening lyrics remind me of ‘Revenge… Best Served Cold’ so much that the first time I heard it, I felt a tinge of deja vu.  Closer inspection shows that two songs couldn’t be more different other than the hook of the lyrics that start each verse.

Tommy mentioned in a recent interview that he wasn’t sure if anybody paid attention to the vocals and/or lyrics. I certainly try to, so having the lyrics printed on the insert is pretty awesome. The lyrical content of the album is themed around a few core principles that you hear in a lot of recent Prong material: self doubt, belief, individuality, pride. All pretty personal stuff that belies Tommy’s friendly and funny demeanour when you meet him in person.

But the lyrics are more founded in themes that most people will understand.  I have to confess to not having a clue what earlier “reformation” tracks like ‘Siriusly Emerging’ or ‘Red Martial Working’ are about!  Fabulous songs, mind you;  I’m not picking on them 😉

I went for the double vinyl with CD, so I also get the bonus track that is on the digipak.

I’ve only recently been following this trend.  Although I have a few older Prong releases on vinyl, this is only the 2nd of the recent releases I’ve bought.  Ruining Lives being the other.  As it’s my birthday soon, I’ve decided to fill out my collection and I’ve populated my wish list with the missing LPs 🙂

The presentation of this gatefold vinyl is superb.  Stylish doesn’t begin to describe it.  It has me addicted.

To cut a long story short:  Another awesome album – I hope we get to hear loads of it on the tour next month.